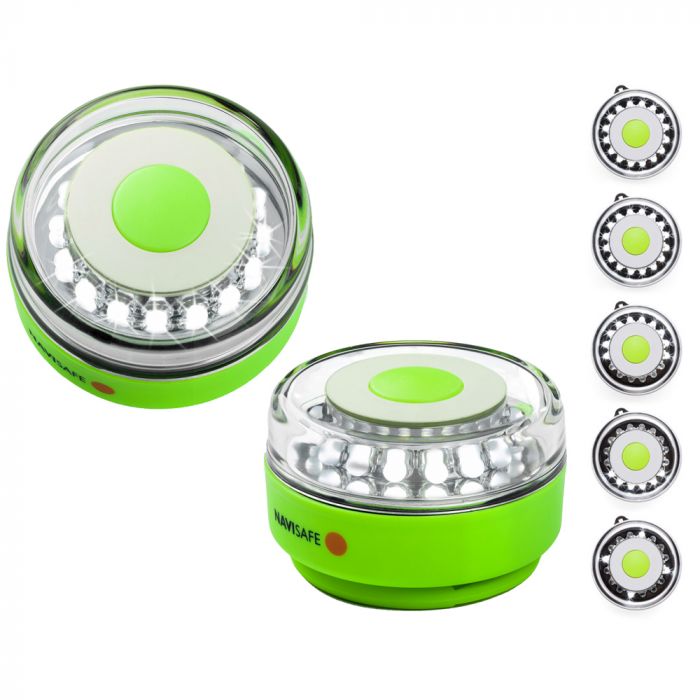 The Navilight 360° Rescue Edition 2NM - US Coast Guard approved for 2 nautical miles is based on the Navi light 360° 2NM and includes a 360° All-round light, 225° Masthead light, 135° Sternlight, Flashing light, Anchoring light and a Cabin light. Additionally it is fitted with a glow in the dark circle around the switch. These unique glow pigments glow for 8 hours after only 10 minutes of exposition to daylight. This and the emergency green color of the body, makes Navi light 360° Rescue Edition 2NM extremely easy to locate, day and night. It uses super bright LED light, is water proof, floats and attaches almost anywhere through its double magnetic mounting system.

*Based on the Convention on the International Regulations for Preventing Collisions at Sea, commonly called 72 COLREGs

In a vessel of 12M or more in length but less than 50M in length:

In vessels of less than 12M in length:

The double magnetic system consists of the Navi light with its magnetic base, a separate magnetic plate and a screw for attaching the plate to a wooden deck for example. It also holds the light safely on many plastic boats, biminis or any other material by placing the light on top and the magnetic plate underneath. Additionally Navisafe offers a wide range of specially designed magnetic mountings such as the Clamp-on Rail mount, Bendable Suction-mount and the Telescopic Poles that easily allow the lights to be attached.

WARNING: This product can expose you to chemicals including di-2-ethylhexyl phthalate which are known to the State of California to cause cancer. For more information go to www.P65Warnings.ca.govWARNING

Please be aware that all products have a production or warehouse lead time. This is the number of business days (typically not including the day the product was ordered) that must pass before the item begins the shipping process. Please see the "Ships: In" information located within the main product description to the right of the product image and below the ADD TO CART button for that particular product's "Ships: In" timeframe.

IMPORTANT: Please note that these timeframes are estimates only based on the latest information provided to us by the manufacturer/supplier. Delays in both material, production and shipping timeframes by manufacturers can vary without advanced notice and while we do our best to keep "Ships: In" timeframes up to date we may not always be able to do so due to a variety of factors.

If a product is needed by a specific date we strongly recommend you reach out to our Sales team (1-800-869-1686) to verify shipping timeframes.